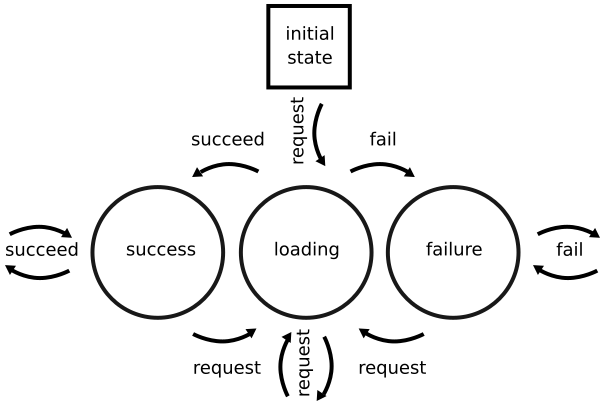 Hello, my name is Pablo and I work as a backend developer at AnyFactory. For this article though I’ll wear my frontend development hat to present a simple way of dealing with moderately complex client/server interactions on web applications using React and a robust architecture involving state machine modeling via reducers. Hope you enjoy it!

■ What are state machines?

State machines (known as well as finite-state machines or FSM) are computational constructs that can be used to model linear processes represented by a set of states.

One of the most known usages of state machines are public transportation turnstiles. They have a finite number of states: locked and unlocked. Here is a simple graphic that shows us these states, with their possible inputs and transitions:

We can replicate state machines using React and reducers, which were once part of the Redux library but are now available as React hooks. Implementing then state machines with reducers is simple, we can do that following this pattern (in pseudocode):

Now we’re clear about the structure of the reducer, we’re going to design a simple client/server state machine based on the following state diagram:

Now we’re going to implement our state and actions:

That’s four states counting the initial state, and three actions to transition from one state to another, the reducer then is implemented like this:

Then we’re gonna add some view components, first we write the view for the INITIAL state:

Nothing special, just a welcome message and a button to send the first request. After sending a request we’re gonna need a view for the LOADING state, which is just a message informing the user that the request is in flight:

Then we’re gonna need two final views, one for SUCCESS and another for FAILURE states, both allowing us to send another request:

We’re gonna implement now a controller component that will load the reducer, dispatch our actions and decide which view is rendered depending on the current state. We have to dispatch the REQUEST action immediately when the views call the event handler defined as onClick, and to simulate a delayed server response we will be dispatching SUCCEED or FAIL actions, by randomly picking one after a timeout of one second:

We can finish our App component that will render our RequestController and anything else we want to display:

You can find the complete code running on this code sandbox:

The example application is now finished and we can be reasonably sure that it will behave exactly in the way that we designed it, each view will be presented when is required and the component will never be in an undefined or mixed state.

State machines are a simple way of defining valid state transitions that can make your application very robust. Nevertheless, we could go further and add static type checking via Typescript to minimize as well errors that can arise from the implementation of the state machine itself. I’ll leave that as an exercise for the reader and will talk more about static type checking on the next article.

[Tech Blog] The Cross-platform solution for the new TalentMind People

Looking to kickstart your career with AnyMind Group? Head over here for our available positions.

Have a question for us? Reach out today and a relevant expert will be in touch with you.